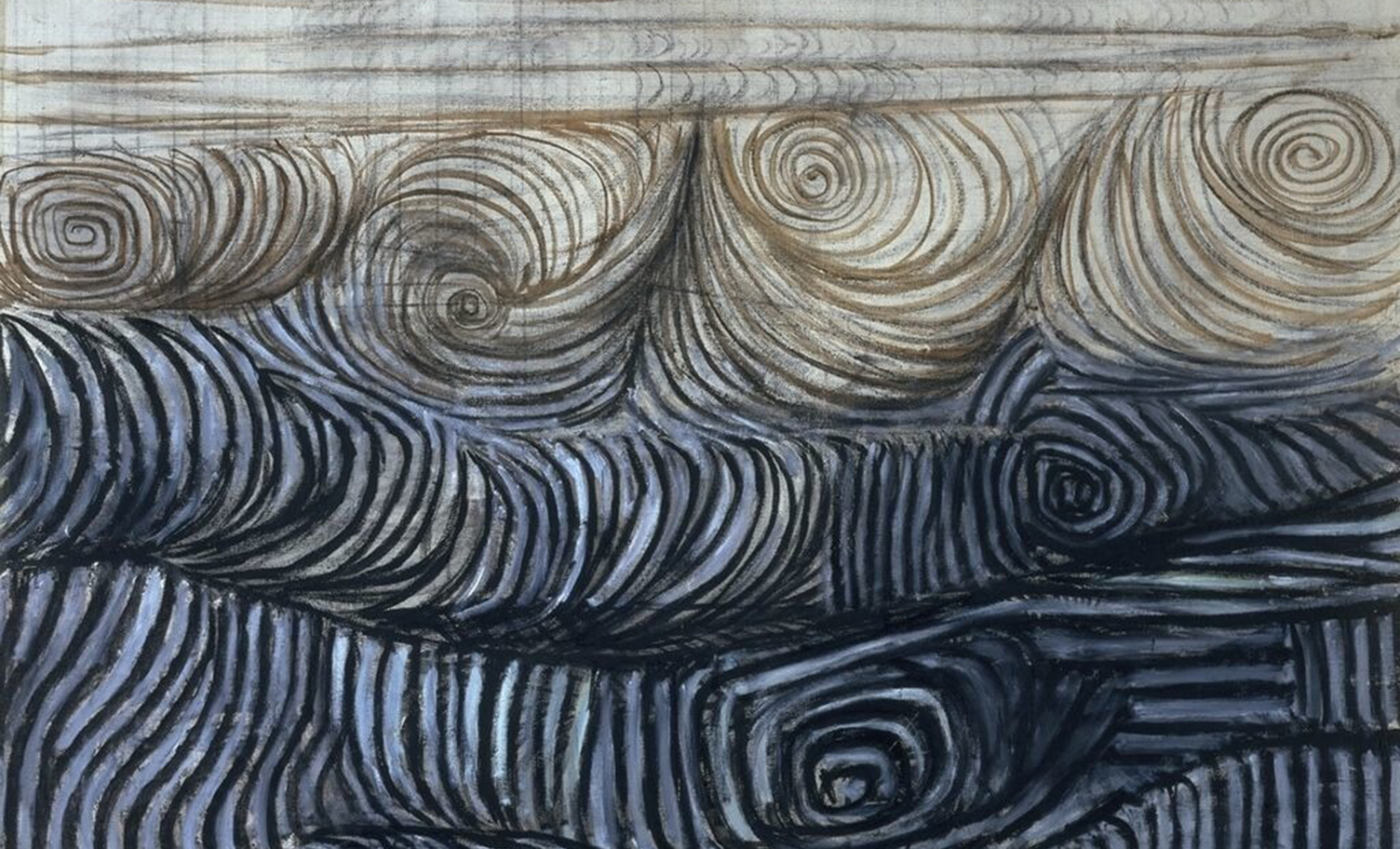 In this new series I’ll be looking at one of Victor Pasmore’s works alongside another by a 20th century Maltese artist (with no particular chronological format). I’ve chosen to dive straight into the abstract whilst introducing Frank Portelli (1922-2004).

Frank Portelli was one of the founders of the Modern Art Circle (later the Modern Art Group and eventually Atelier ’56) which was instrumental in generating awareness on the modern art movement in Malta. He was also one of seven Maltese artists who was chosen to represent Malta for the very first time in the Venice Biennale in 1958. Throughout his artistic career he experimented with a variety of mediums – sculpture, stained glass, etchings, collages and oils and always viewed the future as a challenge to better his performance.

Spiral Motif in Black and White – the Wave is a painting by Victor Pasmore executed in 1950. Apart from the narrow upper band it is composed entirely of spirals that give the painting its sense of movement and energy as the rolling waves swirl and froth. Frank Portelli’s Contours No. XII from1973 has a similar divided composition, and although not specified, we tend to see land and sea. The painting moves differently to Pasmore’s. It is undulating and curvaceous rather than circular. There is also an element of stasis and calm in Portelli’s work, whereas Pasmore’s work moves forcefully in its entirety. As the title of Portelli’s painting suggests, the emphasis is on contours. His years of experience map reading at the air ministry, plotting grids and observing the contours of the different landscapes was the main inspiration for this series. These wonderful hill-like motions are repeated one behind the other, giving the impression of blurred vision or a moving polygraph test. Both paintings have a clear division in their composition brought about by a change in colour scheme. Light colours on the top band and darker ones for the bottom.  In Portelli’s work, the two parts of the painting mirror each other. If we take the top part to be hills or cliffs, we can see the same image in the bottom half, executed in deeper underwater colours. Using just one design, the spiral, Pasmore manages to achieve both perspective and gradation in the turbulence of the waves, with a change in colour to differentiate between the deep sea below and the head of the wave above. Both artists chose to challenge themselves and experiment further with these motifs. Pasmore developed a series of landscapes all executed using the spiral which is said to be the basic form of natural geometry as well as a symbol of eternity. It is an important phase of his work which once exhausted, he would make the transition to constructivist art. Frank Portelli also serialised this idea, and his Contour Series is considered to be his greatest achievement in his contribution to abstract art.