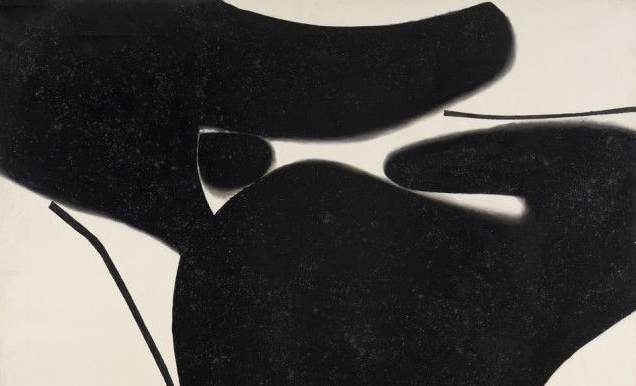 Not a name that is instantly recognisable to many as a modern Maltese artist, possibly because Jean Zaleski nee Busuttil emigrated to the USA with her family when she was just 8 years old. Born in Birkirkara, the youngest of 11 children, Zaleski kept her childhood memories of Malta alive through her creative spirit, paying homage to the island’s history, customs and lifestyle though her art. In a reversal of roles, Pasmore at almost 60 years old, left his home in the UK to settle in Malta with his family. Although he has denied any influence of the climate, environment and history on his work, critics agree that the final shift in his art takes place after his relocation to Malta.

It is not Malta however I have chosen to discuss here, but two representations of animals, remarkable in their simplicity and intriguing in their execution. Cow by Zaleski and Black image: The Swan by Pasmore are both executed in black and white and are all about form and space. Zaleski’s Cow is a screen-print and is unusual in its composition. As viewers we stand directly behind the large haunches of a resting cow – an expanse of black broken up only by two white patches. The head of the cow at the far end is indicated by a pair of ears. With no detail to speak of, it is predominantly the masterful outline of the cow that gives the piece its entire being, as the line travels from ears and neck down to the shoulder and hip bone. The focus of the print however remains the torso of the cow, as the central bulk of black takes up most of the space emphasising the sheer size of the animal.

The Swan by Pasmore is less obvious to read. In around 1960 Pasmore began to make large square canvases with a single huge shape as he became more interested in the study of structure and form. Just as we see in Cow, the central focus here is a large, black, curvaceous shape that seems to beheld in place by two black sticks. When asked about painting from nature, Pasmore said ‘I do not paint directly form nature: I endeavour to paint in reaction to natural forms.’ And this is just what we see in The Swan– graceful curves, elongated necklines, beak like shapes - all characteristics of a swan without actually seeing one.

Both artworks have a collage-like quality as the shapes seem to be cut out and stuck on. Pasmore would later expand on this idea and build on and around these central shapes by using sponges and spray guns, experimenting with space, form, and the concept of metamorphosis. A series of Zaleski’s cows also appears as illustrations in a poetry book by Edwin Honig called Cow/Lines. Zaleski said: ‘I paint in series. I paint themes that fire the need to express how I feel about a particular subject… then I must explore the subject until the fire burns out, or another subject captures my spirit.’ This screen-print, Cow, is one of three editions of prints entitled ‘From Pastures’. Interestingly both these works have travelled. Cow was part of an exhibition entitled Art and Feminism at Spazju Kreattiv, Valletta in 2020 that also celebrated the centenary of Zaleski’s birth. The Swan was one of Pasmore’s works on display at the SaoPaulo Bienale 1965 where he was one of the artists representing the UK.