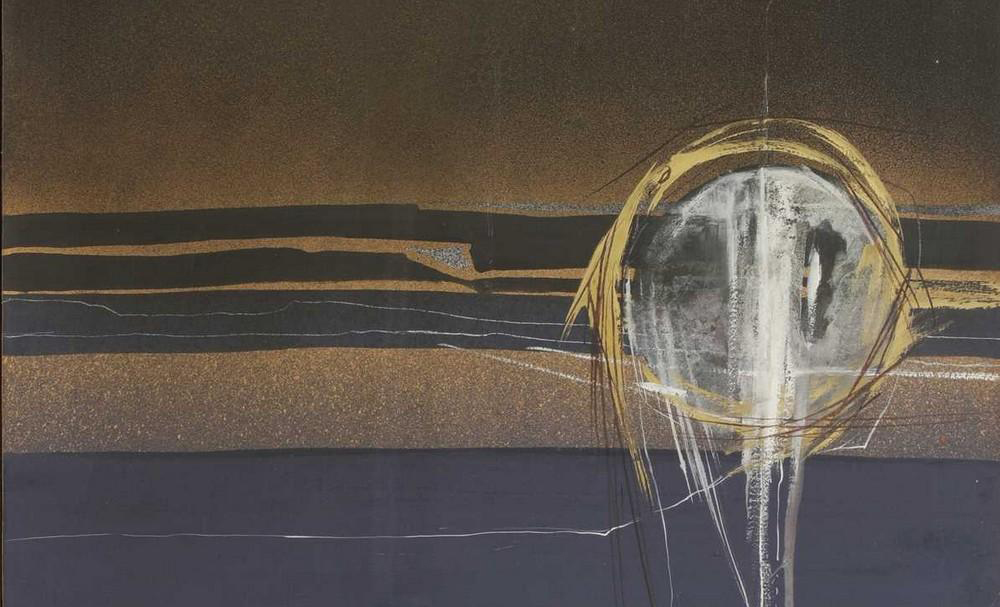 Pasmore and his Maltese Contemporaries

‍Hear the sound
of a magic tune
caress the night
awake the moon.
But whose the tear,
the piercing cry
which splits the silence
in the sky.

Above is Victor Pasmore’s poem, written on his artwork Hear the Sound of a Magic Tune (screen print on paper, 25 editions, 1974). Reading the poem as we look at the image gives the work a fairytale element, a sense of the enchanted – qualities that would have been unlikely were it not for the words to accompany it. The serenity of the balmy night depicted in bands of earthy colours with a bright moon, is rudely disturbed by ‘a piercing cry’ – a bird? a villain? - that whilst splitting the silence also splits the painting. The chaos is presented as a series of black irregular shapes that seem to suddenly break apart from each other simultaneously dividing the painting. It is the only movement in an otherwise still composition. Pasmore’s concern with symbolism in his later works led him to create a relationship between his poetry and images, intending ‘that the two form a kind of symbol or metaphor for each other; in other words, a synthesis.’ (Letter to friend and poet Roy Fuller 1985). He saw this as another extension to abstract art and went on the develop and integrate symbolism as well as metamorphoses into his later works.

Also from 1974 is Emvin Cremona’s Dark Sun (mixed media). Interestingly, if we read Pasmore’s poem again whilst looking at Cremona’s painting this time, we can see how similar the mood it conveys is. The title informs us it is the sun, though it feels like a dark night, also imbued with an atmosphere of magic or supernatural. The moon-like sun is almost electric as it drips onto the landscape below, breaking through the horizontal bands in the process. Like Pasmore, Cremona also uses bands of colour to create this landscape as well as a similar colour palette, in particular the brown tones for the sky. Compared to Pasmore’s yellow square, the land is less abstract here, and very striking in white as it depicts what looks like a local village with its flat roofed buildings and possibly a church in the distance. Best known for his religious works, and for so remarkably and successfully modernising church art, it is in the freedom of his private works that we really see what Cremona was capable of creating, or more importantly what he wished to achieve, away from the constraints and frustrations of church commissions. In his paper entitled Emvin Cremona: A Singular Venturer in Chromatic Harmony (1991), Dominic Cutajar writes ‘the major motivating force behind Cremona’s art appears to be an incessant and all-consuming quest for rare chromatic expressivity’ - which I feel this painting aptly demonstrates.

This is the last is this series of mini blogposts where I discuss a work by Pasmore alongside another by one of his Maltese contemporaries. We will be back with something new in Autumn so keep a look out!