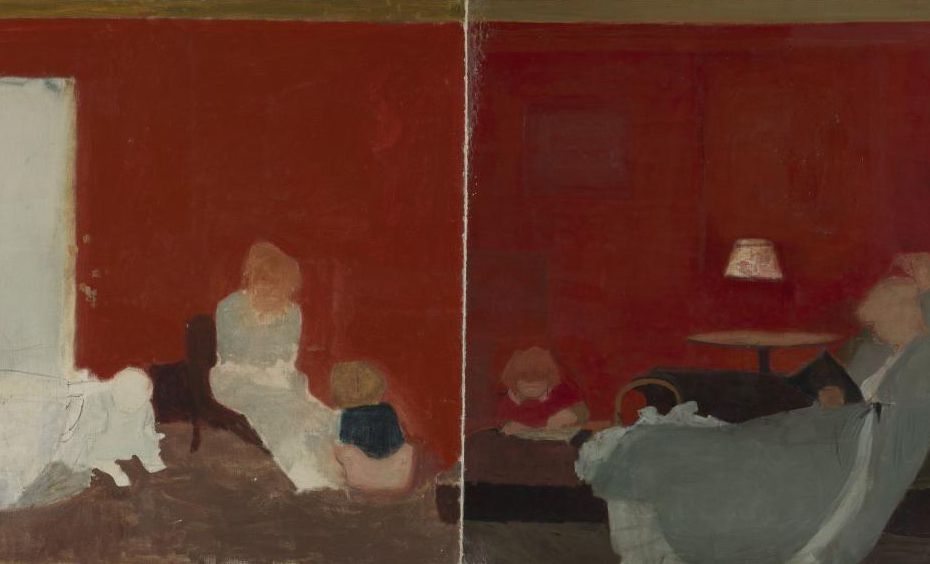 Between 1960-61, Antoine Camilleri was studying at Bath Academy, UK, having been awarded a Commonwealth Scholarship in order to become a certified art teacher. It is here that Camilleri was exposed to British Abstraction and the works and teachings of Victor Pasmore. Between 1954 and 1961 Pasmore was Head of Painting at Durham University and during this period he put together a course for art students (together with Richard Hamilton) - a course that would provide ‘not only the means for intuitive development, but also objective foundations for analytical research’ (‘A Developing Process in Art Teaching’ 1959). While at Bath, Camilleri who had become familiar with these teachings, experimented with abstract art and the relationship between spaces – concepts that he would expand on in his later works.

The Model at Bath (1960) is one of the pieces Camilleri painted at Bath Academy. He was surprised to find that they no longer painted from life models, so he requested one in order to combine the life class with his newfound learnings. At the centre of the painting is a very Henry Moore like reclining figure made up of swirling curves that simply suggest her torso in a wonderfully radiant palette. Despite her taking centre stage on the bed/sofa, we are quickly drawn to her surroundings too. All the objects- chair, table, bed, rest on areas of pure white making us aware of the space of every object within the painting. These are individual shapes in themselves as well as an integral part of the composition. There is no blending of colour here; the walls, the floor, the door – all have their own distinct colour, which apart from emphasising the preoccupation with shape and space, also depict this fantastic 1960s interior.

Pasmore’s figurative work took place in the 1940s when he was recently married to Wendy Blood and had just become a father. His paintings of this period are a reflection of home and family life as well as of his surroundings – Chiswick and then Hammersmith. Interior with Women Reclining (1944-46) also called 'The Red Boudoir' or 'The Abode of Love' is a very large painting of an interior with Impressionist and Oriental influences. Unlike Camilleri’s The Model at Bath where he painted from life, here Pasmore is painting from memory. ‘For the memory, if allowed to follow it’s natural course, and not forced, retains only the essential, that is what is evoked in the imagination, what goes to the heart’ (letter to William Coldstream 1944). Essential to him here are his wife and children who are depicted tenderly in a progression of different poses– in conversation, drawing, reading, whilst the deep red colour gives a feeling of intimacy, warmth and comfort. The large canvas is divided into two by a white vertical line and is said to have been left unfinished. But what if it wasn’t? When we consider that for Pasmore ‘drawing and painting are not separate performances but one and the same act’ (Notes on Drawing 1945), it could well be intentional that this large canvas starts out with a drawing of two seated women and a child on the floor, and then progresses into painting. As he paints, features are lost, details are blurred, and shapes replace objects, preparing us for the next step in Pasmore’s artistic development.

Antoine Camilleri would never lose the subject in his works. In all his experiments with abstraction, he retained a subject even if it meant superimposing a self-portrait over an abstract work. He went on to produce a fascinating range of works in different mediums including clay, collage, prints and stained glass. This experimentation stems from art having such an enormous presence in his life that ‘it forces [him] to do what it likes, it commands [him].’ Victor Pasmore would delve deeper and deeper into the abstract, also experimenting with various techniques, as his subjects become representations that as viewers we almost feel rather than see.