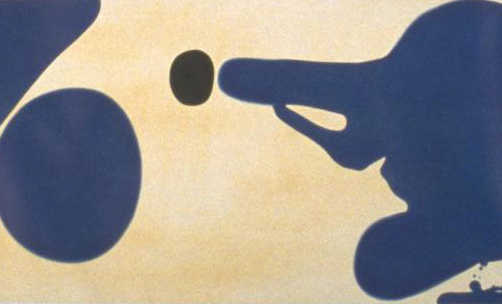 Camilleri goes on to say that when listening to the Maltese Għana (a type of traditional Maltese folk music), he was less interested in the tune than he was in the experience. Victor Pasmore and Alfred Chircop knew Charles Camilleri and were familiar with his compositions. For them, the ‘structure’ chosen was abstraction, developed obsessively over many years. Both artists are known to have been strongly influenced by music, predominantly classical, and have, on several occasions, integrated their personal musical interpretations and experiences into their art as is perceptible in these two works.

Abstract (1986) by Chircop is somewhat sombre in mood. If we were to listen to this painting rather than just look at it, we would hear a loud crescendo in the angry, vigorous black brushstrokes. This diminishes slowly as they descend onto a plateau of white cloud, entering a dimension of calm and serenity as the melody softens and stabilises, andante. There is a spiritual awareness in this painting, and we know that Chircop was a fervent believer in the greatness of God, instilling in his abstract works an otherworldly quality and a cosmic ambiance. One interpretation here could be human struggle achieving spiritual peace, or the battle of good and evil. As with almost all Chircop’s abstracts, the omission of a title leaves it completely open to interpretation, though without a subject, the narrative is dependent on colour, form and composition, just as in a piece of music the narrative is found in the rhythm. Chircop is known to have enjoyed painting whilst listening to classical music, so his choice of music would no doubt have influenced the outcome of his work.

In a note in the Redfern Gallery catalogue of 1948 where Pasmore exhibited eight abstract works, he wrote ‘Abstract painting emerges as a pictorial art closer to music than has hitherto been possible… in abstract painting we can speak of visual music.’ He compared the rhythms, sounds and timings in music to the spaces, colour contrasts and tonality of a painting, both being suggestive rather than representational. A good example of this is Un Bel Dì Vedremo (Puccini) (1978). The title could not be more specific. It refers to Puccini’s famous aria in Madama Butterfly where Butterfly is waiting for the return of the ship that will bring back her naval officer husband Pinkerton who has yet to meet their son. In it she describes this hopeful event in detail from seeing the smoke of the ship right down to a romantic happy reunion, which sadly ends in tragedy. Unlike Chircop’s Abstract that is left open to our interpretation, here we are left to analyse Pasmore’s personal interpretation of this story. Blue is representational of the sea and sky, as Butterfly looks with yearning towards the horizon, and a large expanse of blue pushes a black spot, maybe Pinkerton, towards the larger circular shapes of Butterfly and her son. Blue also represents loyalty, trust and sincerity – all of which are soon to be obliterated when we find out Pinkerton has married someone else. Towards the bottom of the print is a straight black line, directly emphasising the finality of this scenario, as Butterfly takes her own life. This print was made using the etching/aquatint technique. By pouring a special solvent directly onto the copper plate, Pasmore could play around with the flow of the solvent until he was happy with the image created. A lyrical process in itself.

Both artists were exceptional in their field. Pasmore was at the forefront of the British Abstract movement whereas Chircop is known as the father of Maltese Abstraction. Both developed their ideas of space, form and colour achieving harmonious, lyrical, and flowing compositions, though very different from each other. Just as composer Charles Camilleri was more interested in the experience than the tune, both Pasmore and Chircop believed that one of the reasons abstraction is the highest form of art, is because it is left open to individual experience. In regenerating old folklore tunes again and again, recreating and renewing, Camilleri developed a trait that made his music compositions instantly recognisable. The same happens with Pasmore’s organic shapes and Chircop’s vigorous strokes of explosive colour, in their late works. Our interpretations are unique, but the artists’ individual style remains discernible.