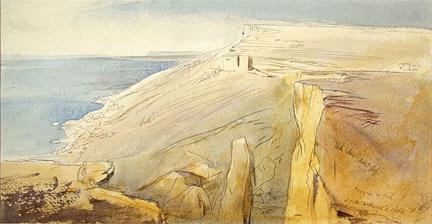 Edward Lear (1812-1888) was a consummate landscape artist who is best remembered for his paintings and his so-called ‘nonsense’ verse. During his lifetime Lear published several volumes of verse as well as accounts of his many travels. His travels were motivated by his desire to escape the damp winters of his native London and by his incessant search for new landscapes to paint. On his way to the milder climes of Greece and the Middle East, he frequently made stopovers in Malta. In 1865-66, however, he made the island his final destination. During that four-month visit, he painted nearly 300 on-site and a few dozen studio watercolours. This show brings together a number of these watercolours in an innovative display which matches up the works with Lear’s corresponding diary notes, giving us an unprecedented insight into the artist’s state of mind and working method at the time. In recent decades Lear’s art has been recognized and appreciated, and came under the spotlight in a number of posthumous exhibitions in prestigious museums in the UK and the US. Correspondingly, paintings by Lear have now become very collectible.

A programme of related events including lectures, gallery talks, artist workshops and children’s workshops will run throughout the duration of the exhibition.